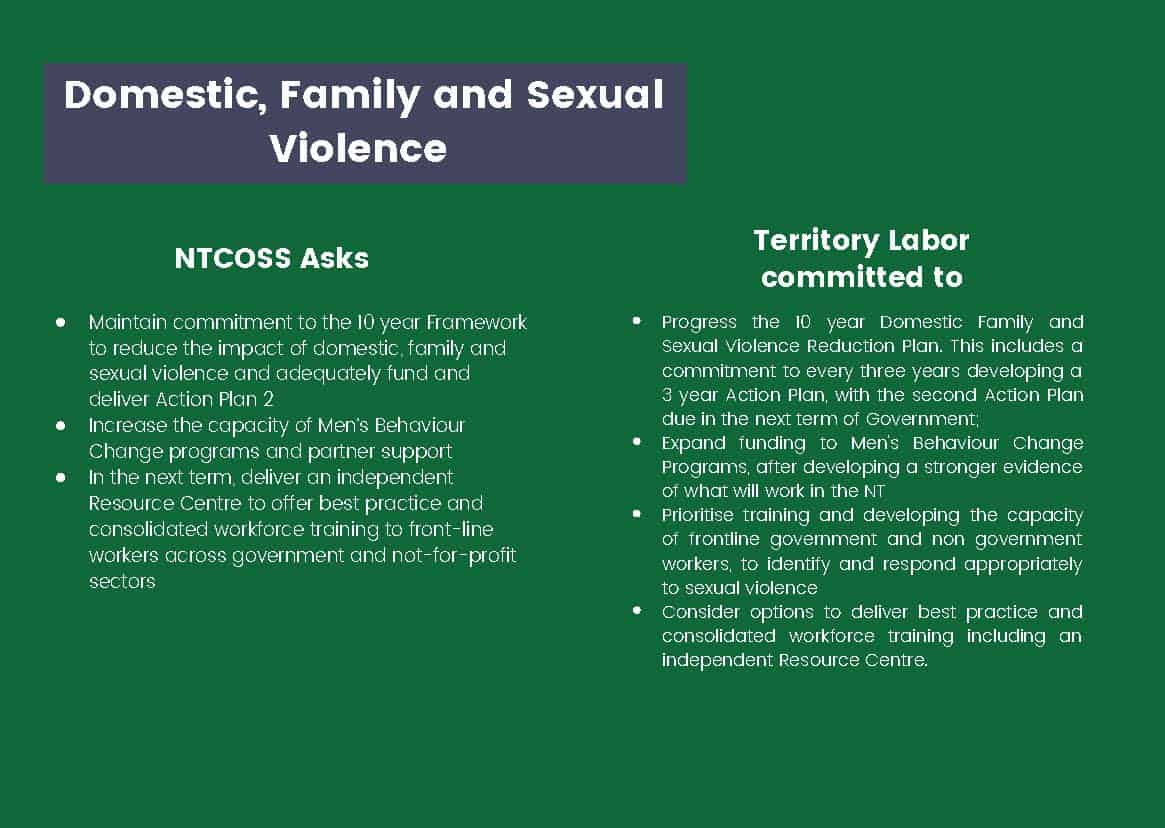 Maintain commitment to the 10 year Framework to reduce the impact of domestic, family and sexual violence and adequately fund and deliver Action Plan 2.

The NT experiences the highest rates of domestic, family and sexual violence in Australia. On average there are 61 domestic and family violence incidents on a typical day and four domestic and family violence related homicides per 100,000 people per year. Reporting by the Australian Bureau of Statistics shows that Aboriginal women are particularly impacted by this form of gender based violence, accounting for 89 per cent of all domestic, family and sexual violence victims in the NT.

Domestic and family violence is a gendered crime, with women and children disproportionately over-represented as victims. As reported by Our Watch, nationally on average one woman a week is murdered by her current or former partner, and one in three Australian women have experienced physical violence since the age of fifteen.

While particular sections of the community may be more vulnerable to domestic, family and sexual violence due to compounding factors, this form of violence does not discriminate. Women and girls around the world, regardless of income levels, experience additional disadvantages on the basis of age, income, ethnic or religious identity, geographic location, sexual orientation and gender identity, disability and immigration status (among a range of other factors).

The impacts of domestic, family and sexual violence as a driver of poverty and disadvantage are well documented; they include social isolation and exclusion; economic disadvantage (particularly regarding how changes in circumstances can impact income); and is the main reason women leave the home in Australia.

With the high rates of domestic, family and sexual violence in our communities, adopting an approach that addresses the causes of this behaviour and that places the needs and experiences of victims at its core should be made a priority of any incoming government in the NT.

In 2018 the NT Government released the Domestic, Family and Sexual Violence Reduction Framework 2018-2028; Safe, Respected and Free from Violence. The Framework has a broad remit, and is far reaching and aspirational in its targets. The Framework articulates a shared vision and commitment, with a whole of community and cross government approach, for a future where women and children are safe and families are supported. The ten year plan acknowledges the breadth of reform needed in this space, and building off previous/current government strategies and targets, is a foundation for change in our communities.

NTCOSS believes that all people have the right to live a life free from violence, and is a strong advocate for putting an end to all forms of domestic, family and sexual violence in our communities and working to address the related social harms. NTCOSS works in partnership with the specialist domestic, family and sexual violence sector, government and advocates to adequately resource the various recommendations within the Framework. Better outcomes in this space are dependent on a true co-design model, and NTCOSS is supportive of the vision and reform agenda that has been undertaken.

The Framework is supported by key principles and outcomes and its implementation reliant on the delivery of Action Plans. 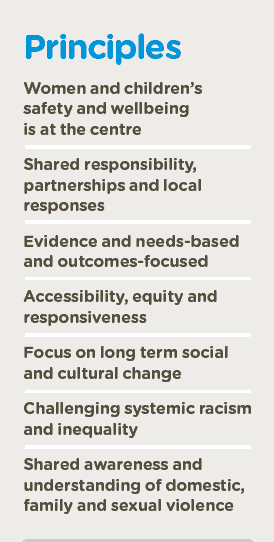 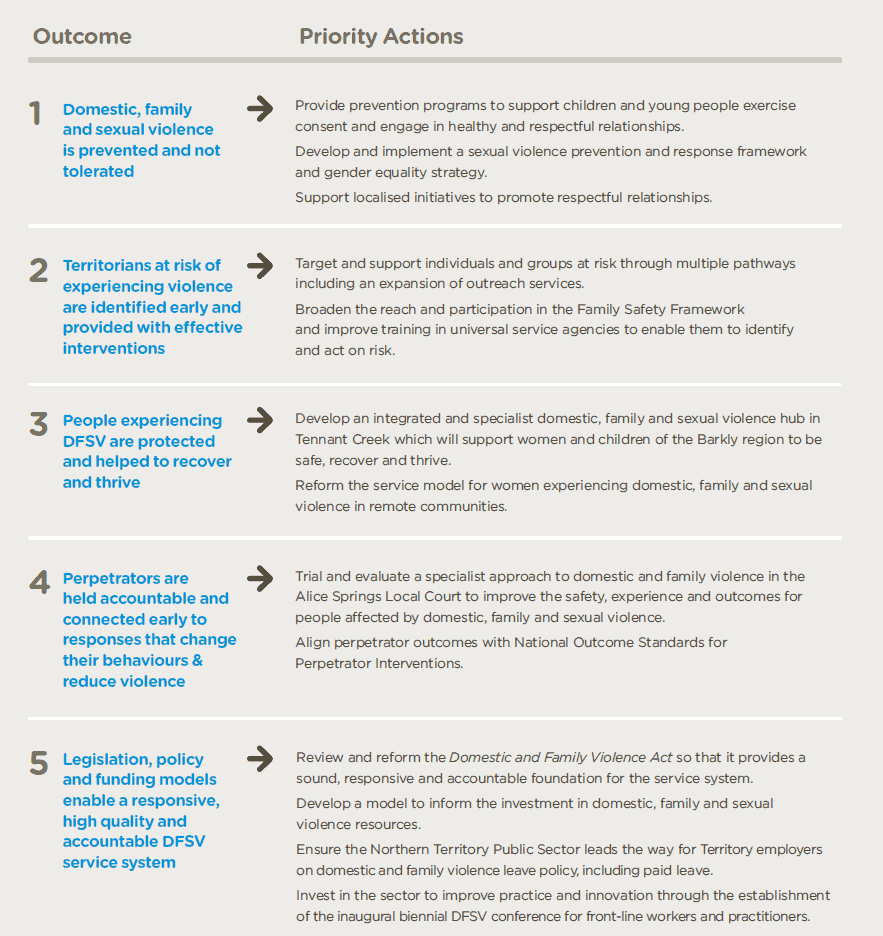 The Framework’s Action Plan 1: Changing Attitudes, Intervening Earlier and Responding Better 2018-2021 identifies key outcomes including an increased focus on prevention and early intervention; supporting the development and capacity building of a sustainable and responsive domestic, family and sexual violence service system; addressing sexual violence, including in the context of domestic and family violence; and supporting action-based and integrated service system responses.

Action Plan 2 – 2022-2025 implementation is based on the evaluation and review of Action Plan 1, and is not only posited to further the reform agenda, but provide an opportunity to look at what does/doesn’t work and address further needs. The complex issue of domestic, family and sexual violence needs long-term vision and reform, and ensuring the continuation of the current reform agenda should be a priority of any future government in the NT. The process has only just begun and must continue. In this regard, NTCOSS is calling on all parties to maintain commitment to the 10 year Framework to reduce the impact of domestic, family and sexual violence and adequately fund and deliver Action Plan 2, including increasing the capacity of Men’s Behaviour Change Programs and partner support.

Increasing funding to programs that focus on prevention, early intervention and addressing the root causes of violence, while providing adequate and appropriate support to victims and their families, need to be prioritised when responding to domestic, family and sexual violence.

Domestic, family and sexual violence does not occur in isolation and both victims and perpetrators experience intersectional issues that compound behaviours and experiences, such as trauma, drug and alcohol misuse, and homelessness. To truly see longstanding outcomes, intensive and long-term support needs a holistic wrap around response.

Outcome Four of the Framework identifies that perpetrators are to be held accountable and connected early to responses that change their behaviours and reduce violence. Increasing funding and resourcing and expanding the provision of Men’s Behaviour Change Programs in the NT (currently of which two are run, one in Darwin and one in Alice Springs, with a reduction in funding experienced in 2018) is crucially important to ensuring participants are supported to address behaviours within programs delivered to a high standard.

Men’s Behaviour Change programs are underpinned by the need to continually assess and manage the risk to victims (including children), ensuring their safety and freedom. Men’s Behaviour Change programs operate with the concurrent provision of safety planning and intensive support to the female partners of Program participants through a Partner Contact Worker provided by a suitable women’s service.

Long term, sustainable investment in therapeutic programs that focus on early prevention and intervention are a cornerstone of reform in regards to domestic, family and sexual violence in the Territory.

In the next term, deliver an independent Resource Centre to offer best practice and consolidated workforce training to front-line workers across government and not-for-profit sectors.

A stated priority within the Framework is to build workforce capacity in the domestic, family and sexual violence service area. Developing workforce capability ensures workers have the skills required to effectively and safely deliver services, contributing to an informed, consistent, culturally secure and effective service response for people experiencing or perpetrating domestic, family and sexual violence.

While there are positive steps being taken regarding the development of the Domestic, Family and a Sexual Violence Workforce and Sector Development Plan by Territory Families, ensuring the appropriate resources and funding are put in place to support the implementation of any such plan is crucially important.

The development of a Domestic, Family and Sexual Violence Resource Centre should be prioritised to assist in addressing training and sector needs. Such a centre could assist in building specialist knowledge and resources specific to domestic, family and sexual violence in the NT. Resources that are currently being allocated to a range of non-specialist staff working in the domestic, family and sexual violence space in a variety of government and non-government agencies could be redeployed and consolidated into an independent resource centre.

A resource centre could fulfil the role of researching needs and service gaps; identify current best practice; consolidate subject matter expertise; and design effective training and other resources for government and non-government workers in the NT. Skilled and specialist resource centre staff could tailor effective training to meet the needs of the culturally, professionally and geographically diverse workforce while building consistent understanding and harmonising service responses across the Territory.